Brian Coffin is a Native artist who is creating contemporary paintings that are uniquely textured and heavily layered impasto paintings. Each painting takes time to create and each is a masterful creation of true expression. 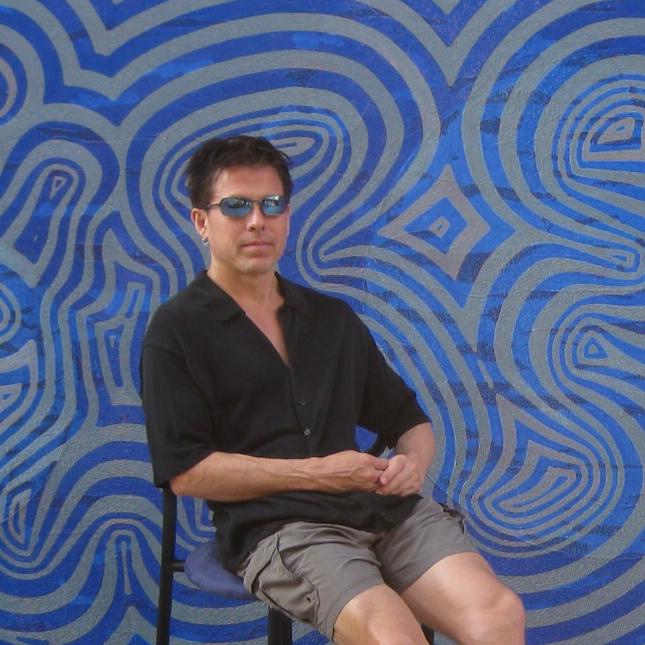 I believe in what the universe has to offer.
In the spring of 2001, living in the Pecos Wlderness of New Mexico my painting career began. As a sculptor I felt as though my true calling had not been realized; that of being a famous oil painter. My father, a sculptor and painter, gave me several blank canvases and asked me to draw a circle on each one and to wait and see what comes to me. Reluctantly, I did so. In the meantime, I continued to sculpt, when one evening, as I was lying in bed, my eyes wide open, a vision appeared before me and I knew this was the gift I was waiting for. My eyes welled up with gratitude as I thanked God, jumped up out of bed and started on my first painting, “In the Beginning”.
I worked around the clock, soon understanding this was to be a long problem solving process turning the vision into reality. Impulsively, I went out and ordered a 56” x 168” canvas, before I had even put color on the “In the Beginning” piece, because I saw where this was going. I would make “In the Beginning” the study for the large canvas without ever knowing how long the process and journey was to take. I was so inspired, I knew I would follow this process through to the end. “Journey to the Soul’s Reflection”  56” x 168” canvas took 5,000 hours to create, was worked on in three different locations in the Western States, over a three year span. I have never felt more blessed and have not stopped painting since. It is my privilege to paint.